A downloadable game for Windows

Objective:
Clear the field of monsters!

Draw unique monsters from the deck and play them to load your projectile.
Each monster has several attributes:

Each card has a set number of times it can be played, its Decay.
Once a card's decay reaches zero the card is destroyed and replaced with a capture card. Playing a capture card allows you to shoot a capture orb at any monster on the board - thus adding that monster to your deck.
Since each card can only be played a set number of times be sure to diversify your deck by capturing monsters on the field. Prioritizing diversity makes you stronger by granting you more options.

IMPORTANT NOTE: We were unable to implement the capture system during the game jam.

Notes/Bugs:
To reload your hand, just play all your cards or click on the little boxes on the table to reload.

If the table doesn't load properly (no cards on start) please just restart because this is held together with duct tape and a dream.

Made with Visual Studio, GLFW, GLEW, FreeType, and lots of pain.

Monster sprites come from a pack by xBeowulf on itch.io 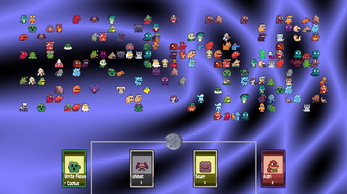